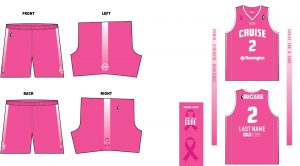 DETROIT – The Motor City Cruise, G League affiliate of the Detroit Pistons, announced today that they will debut a new custom uniform for their game against the Greensboro Swarm on Sunday, March 20, at 3:00 PM.

“Having the opportunity to help in the fight against breast cancer and honor those who have been directly affected is something we take great pride in,” said Rob Murphy, President and General Manager of the Motor City Cruise. “The custom-designed uniforms symbolize power, strength, and resilience, and we are honored to have the chance to play for the names on the back of the jerseys.”

Teaming up with Henry Ford Health System, Huntington Bank, and Game On Cancer, Cruise players will wear full pink uniforms that pay homage to those close to them who have endured a battle with breast cancer. The name on the back of their respective jersey will be changed to a special person who has been affected by breast cancer in their life. Following the game, the jerseys will be gifted to the players’ honoree or the family members associated with their uniform. In addition, a portion of the proceeds for every ticket sold will be donated to Game On Cancer.

“Cancer is a leading cause of financial toxicity and bankruptcy in this country,” said Mary Jane Vogt, Executive Vice President and Chief Development Officer, Henry Ford Health System. “Thanks to the generosity of our community of peer-to-peer fundraisers and corporate sponsors, we are able to make an immediate impact in the lives of our patients. Game On Cancer works alongside the expert team of the Henry Ford Cancer Institute to alleviate hardships and advance research while people are receiving the best possible care. The contributions of Cruise for a Cure further advance our ability to help the people we serve.”

Founded in 2015, Game On Cancer is an impactful community initiative designed to alleviate challenges faced by patients experiencing cancer. Since launching, Game On Cancer has raised more than $6,000,000, with 100% of the proceeds going directly towards patients and research programs.

“As someone who developed breast cancer in her twenties, I am living proof that cancer can affect anyone,” said Dorthilen Haynes, a survivor of triple-negative breast cancer and recipient of support from Game On Cancer. “The cancer journey is never easy, but I feel blessed to have the support of my husband, my family, my care team at Henry Ford, and Game On Cancer. My support system and the assistance Game On Cancer provided made a huge difference in helping me stay focused on completing my treatments and healing.” Haynes will be one of the honorees in the Breast Health Awareness game on March 20.